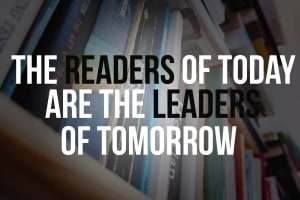 In the modern world, there’s so much to distract children, in fact almost everything that we’re presented with via the TV and the internet is geared towards short attention spans and having information spoon fed in video form. How much of that actually ends up being absorbed by the viewer?

The answer is not a lot, which is why reading still, is so important to the growing mind.

The thing about reading that is so useful to the mind is that it relies on and indeed promotes the imagination. The author will describe what is happening, but it is down to the reader to visualise what is being described, which is not something a movie or a YouTube clip requires you to do. Not only that, but the parts of the brain used whilst reading are ones that will serve you so well later in life, particularly for children still at school, who perhaps read more than most.

There are many types of books on a huge range of subjects available from libraries and bookshops across the world and one particularly motivational genre is the biography, which offers a view into the world of some of the most famous and noteworthy people throughout history.

By being an active reader, children are able to get a grip of the world around them for themselves, rather than relying on social media for all of their information, like so many do today. Biographies are great for finding out more about people who can inspire us to achieve greater things ourselves.

Let’s take a look at a few of those now…

A Leader in Business

Richard Branson is someone that will be immediately identifiable to people of a certain age, but perhaps not to the younger generation. He is someone you may know of as the bearded man who created Virgin Atlantic, Virgin Media and a host of other companies.

He’s a man who has flown around the world in a hot air balloon and fought adversity at every turn. An inspiration for many as someone who just won’t quit.

A Leader in Sport

Jessica Ennis grew up wanting to be a champion athlete and through sheer dedication and perseverance, became a Gold Medal winning Heptathlete at the 2012 Olympic games in London. Her story is one of great commitment to learning a range of different disciplines to a world class level.

Hers is an inspiring story that teaches the reader that you don’t have to give up when the going gets tough.

A Leader in Politics

Winston Churchill was a politician who was a figurehead for the United Kingdom during a time of great turmoil, during the Second World War. He faced down the might of the German army just when it seemed that all was lost and without his efforts, the world would be a very different place than it is today.

Now, many children may not be aware of just how influential the man was, but he is a man that will go down as one of the greatest politicians Britain has ever produced and someone who embodies the ‘never say die’ attitude.

A Leader in Martial Arts Instruction

Whilst our Chief Instructor Shihan Christopher Allen would never compare himself to the greats listed above, he is recognised as a Leader in Professional Martial Arts Instruction.  In 2018 he was presented with an award for his dedication to martial arts instruction by the Mpower Association.  In previous years he has received many similar accolades and he will be the first to admit that one of the pillars of his success is reading.

Shihan Chris has read over 1000 books on Martial Arts, Instructors, School Operation, Management, Marketing, Customer Service, Student Retention not to mention many, many autobiographies such as Richard Branson and Peter Jones.

Shihan Chris’s library shows he is a serious student in his craft!

Without regular reading, the inspiration and motivation contained in the books about amazing people like those mentioned above are lost to the younger generation. Their achievements and the very things that made them great are made real in the imaginations of young readers, immortalizing them in print.

Kids are like sponges, which is why reading at that age can have such a profound effect on their own characteristics and rather than be watching yet another meaningless YouTube clip, they can be delving into so many inspiring topics that could guide them to greatness themselves in future life.

Readers have always been leaders and that is truer now than it ever has been.

Tring Martial Arts Academy is based at the Silk Mill Business Park in Brook Street, Tring.