21 OCT 2019 What is Qigong at Tring Martial Arts Academy? 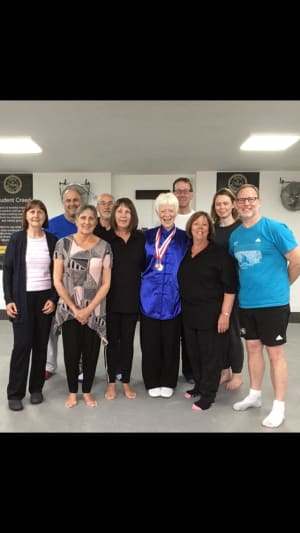 According to: Tai Chi Society

What is Qigong?
Qigong literally means “life energy work” — a way of working with the life energy. It is a healing art, a way of cultivating physical, spiritual, emotional and psychical health, that originated in China about seven thousand years ago, widely practised by the shaman priests during that primitive era. Qigong is part of Traditional Chinese Medicine and was first detailed in an ancient Chinese medical text book — the Huang Di Nei Jing or Yellow Emperor’s Inner Canon – that has been regarded as the fundamental doctrinal source for Chinese medicine for well over two millennia and is still in use today. Subsequent Chinese medical books published in antiquity also reveal detailed theory and the clinical practice of Qigong procedures for treating disease and enhancing health. The art of Qigong can be practised as physical movement that incorporates breathing exercises, or as stationary meditation.


Categories of Qigong
The art of Qigong has three categories which are medical (or healing) Qigong, meditation Qigong and martial Qigong. There are more than two thousand Qigong exercises that comprise of hundreds of different styles, engaged in moving, standing, lying or sitting. Some styles of Qigong foster Qi better than others because of their superior moves and applications — those that are simple are typically more effective and can be excellent for the central nervous system, the chronically ill, and for general health.

Qigong Forms
The forms in Qigong are not nearly as intricate as those in Tai Chi; they need not be executed as precisely. Qigong forms are free in movement and can be merged with an individual’s moving manner. The same form may look slightly different depending on the practitioner’s style of movement, but it is still the same form, and importantly it provides the same healing benefits even if the movements are not done precisely. Qigong can be carried out standing, sitting or lying down with the whole body still with only the extremities moving, so really anyone can practise Qigong.

Health Qigong is taught on Fridays at 7pm find out more here: www.tringmartialarts.com

Connect with me at