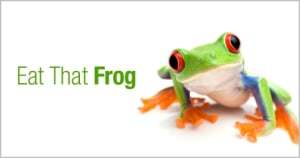 Mark Twain once said that if the first thing you do each morning is to eat a live frog, you can go through the day with the satisfaction of knowing that that is probably the worst thing that is going to happen to you all day long. Your “frog” is your biggest, most important task, the one you are most likely to procrastinate on if you don’t do something about it.

Basically, if the worst thing you had to do each day was to take some regular exercise for your health OR as part of your upcoming Black Belt Test, surely you would “eat the frog” get it over and done with and then go about your day.  Seems, really simple right??

WRONG – its all about habit and routine.

On average, it takes more than 2 months before a new behavior becomes automatic — 66 days to be exact. And how long it takes a new habit to form can vary widely depending on the behavior, the person, and the circumstances.  How long does it take to break a habit? Well the myth is that it took 21 days to change a habit. According to psychologists, while it may take approximately 21 days of conscious and consistent effort to create a new habit, it takes far longer to break an existing habit.

So if you’ve had an unhealthy habit, such as smoking or not exercising you need to be really strong for at least 21 days!!  That means eating that frog 21 times!!

Take a new path!  Join Tring Martial Arts Academy and let us help you establish a new habit!  No frogs will be hurt during training 🙂 !