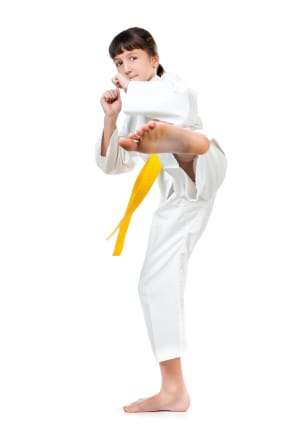 Dojo is a Japanese word which means “place of the way” and it is the name given to the location where martial arts training is given and received. Students are taught to respect and honour their dojo, and in doing so learn to honour and respect themselves and others.

Setting a Great Example
Although the word dojo refers to the training hall, it ultimately lives in the thoughts and actions of the students. The best way a student can honour their dojo is by setting a great example for others both during training and in their life outside of the dojo. No one is born knowing how to act responsibly, it is something we learn as we grow up from watching the example of those around us, and following their lead when we are given responsibilities of our own.  Your child’s instructors will always lead by example, providing a model of good behaviour, respect, and understanding towards other people for your child to follow. In classes, the children are encouraged to set a good example, not only to each other, but to the rest of the world as well.

The Role of Responsibility
Giving your child responsibilities is important. In the modern world, children generally are being given fewer and fewer responsibilities. This can have a negative impact on a child’s development as they grow into adulthood, as they will never learn to think about anyone but themselves.  If your child doesn’t feel they are responsible for their actions they have no motive to behave well; this can lead to problems at home and disruption in school. Giving your child responsibility makes them feel valued and trusted.  When they behave well or fulfil the responsibilities given to them, their confidence and self esteem are boosted.  If you are responsible you will behave the way you should, regardless of whether anyone is watching you or not. By training at TMA and becoming an ambassador for the school, your child will learn to have the courage and self control needed to act decently always, even when faced with the temptation to do otherwise.

Being a TMA Ambassador
Training with TMA brings an additional set of responsibilities outside of the class. When your child joins us at TMA they become an ambassador for the school, representing it everywhere they go, whether they are in uniform or not. As members of the school they should behave in a way that doesn’t bring the school into disrepute. For example, new students are instructed that it is acceptable and appropriate to practice or demonstrate their martial arts skills at home, or during training – but not at school or in the street. This encourages your child to behave well, and also provides you with a way of helping your child to consider the consequences of their behaviour.

At Tring Martial Arts we aim to work with parents, to help give their children a sense of responsibility, teaching them that how they choose to behave is important.

For more information on the classes and education we offer please see our website.