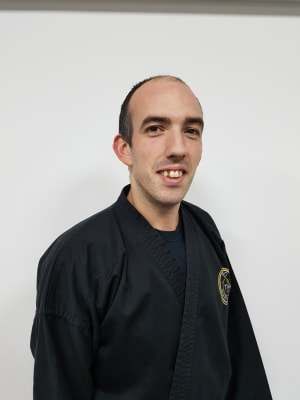 I am delighted to inform you that our very own Sensei Chris Peck will be promoted to the rank of Chief Instructor on Saturday 9th October 2021 between 12:30pm and 1:30pm.  This promotion and special event will recognise Sensei Chris for his stellar commitment to Tring Martial Arts Academy and his unfaltering dedication to his own development.

At this event Sensei Chris will perform a retrospective demonstration of his learning and skills since he started training at Tring Martial Arts Academy.

Since 2017 I have been training him on all the aspects of becoming the Chief instructor and I now feel it is time to pass this responsibility on to Sensei Chris, he has earned it threefold.

Before he joined us a full-time member of the team, I remember how impressive it was that he juggled his commitments as a father, his employment as a baker and his part time work here at TMA.  I cannot remember a time when he didn’t show up for work.  I understood much later that he would leave TMA, head home for a few hours and then start an early shift at 2am as a baker at supermarket in Aylesbury.

I recognised from early in his training that he would make a great instructor because he has a very high moral code and a brilliant character, he is also very technically proficient.

Chris formally entered the Instructor Development Programme in 2014 and started building his knowledge and experience.  In 2015 he stepped up to an Assistant Instructor role and then in 2016 became the Senior Instructor for Krav Maga.  Throughout this time, he maintained his training Freestyle Martial Arts and when I opened here at the Silk Mill Dojo in 2017, I offered him a full-time role as an Instructor / Customer Services Manager.

In 2019 he was promoted to Head Instructor and now in 2021 Chief Instructor.

As Founder, I will of course continue to manage the Academy as a whole and retain my position as Shihan.

I hope you will be able to join us for this historic event in our Academy’s history.  Please return this slip below to your instructor or call 01442 795001 there are only 20 spectator spaces available – book early.