Shihan’s Self Belief Mindsets – Never Doubt Your Own Worth 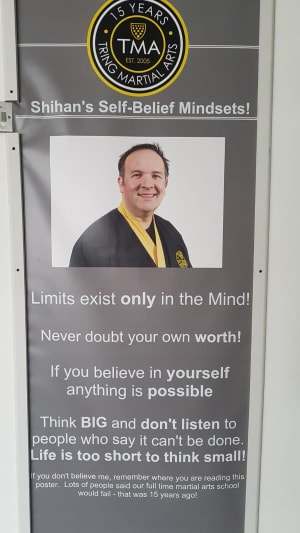 Shihan – is a Japanese term that is used in many Japanese martial arts as an honorific title for expert or senior instructors. It can be translated as “master instructor”.

Mindset – the established set of attitudes held by someone.

Self Belief – to have confidence in ones own abilities and judgement.

Never Doubt Your Own Worth

Back in 2005, when I started my first class at the Red Cross Hall (now the Nora Grace Hall), I had 7 people show up for my first class.  The ages ranged from 12 to 48 and whilst I had experience of teaching students younger than me, teaching the person who was older was a real challenge.  Not for him as he was great and really attentive, genuinely wanting to learn.  It was a challenge for me, I didn’t feel I had the authority to educate someone older than me, what can I teach him, should I teach him where the thoughts running through my mind.

By the end of the first class, once I had established the etiquette for lining up in grade order (which we still do exactly 15 years later) I was much more confident and realized that everyone was here to learn.  I only encountered egos later on from people who had trained in other styles or clubs.  They took a lot more internal strength to over come but without putting in the hard-work, I would never have over come my own doubts that I was worthy.

In our instructor programme I talk about self-belief a lot, it’s a very important concept that takes time to build, but once you have it, just like any skill, it must be practiced or it will diminish.