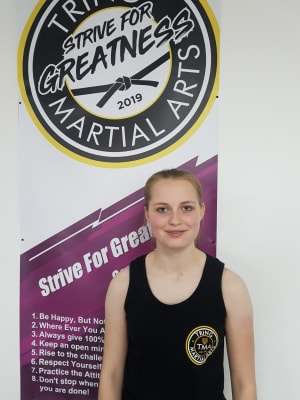 In this edition of TMA Role Models we meet Evangeline Bonham, and interview her about her training. Evangeline is always polite, well-mannered and is a very competent martial artist.  She is an active member of TMA and Black Belt Student.

At this time of year it is easy to consider quitting martial arts due to exams or other school pressures.  So take a moment to meet our TMA Role Models.  These students all continued to train in the martial arts throughout their school life and have achieved amazing things.

1. How did you learn about TMA?
I was invited to a ‘Bring a Friend’ session by Theo Gardiner, my brother was invited by Ollie Gardiner

2. Why did you choose to join TMA?
My first session I remember doing front kicks and jabs, and 7 year old me thought ‘Oh my gosh! I’m like a boxer now! I can do a jab!’ and I just enjoyed it so much, the instructors were so friendly and nice. Also I had a couple friends training there so I decided to join and do training with them.

3. How does your training help with school?
At TMA, I have learnt a lot of life lesson, one of them was to ignore distractions and just carry on. When we did shadow boxing or pad work, sometimes the higher grades would be doing these cool kicks and punches but we were taught to focus on our opponent, our focus pads and ignore any distractions. This has helped me a lot in school as it has taught me to concentrate and ignore people messing around near by.

4. How do you maintain School/Life Balance, has there ever been a time when school was threatening to get in the way of training and what was your though process behind your decision to keep training?
There hasn’t really been anything severely in the way, the only thing I can think of is that once the time of my Brownies meetings changed and my training clashed with it. I really enjoyed Brownies at the time and I didn’t want to quit, but at the same time I didn’t want to leave TMA. So we looked at the time table and managed to find a different class I could attend and it turned out I had a friend training in that time as well, so it all worked out well and I didn’t have to quit anything.

5. Did you ever feel like quitting training?
Yes – The main reason I’ve wanted to quit is because of sparring. Sparring is probably one of my least favourite aspects of training. The escrima sticks, nun chucks and tonfas I find really fun mainly because it doesn’t involve much sparring. But each time I’d go to class 9 times out of 10 it wouldn’t be as bad as I was worried it would be.

6. Can you tell me 5 areas where training in the martial arts at TMA has improved your life?

a. Life skills
At TMA, I have gained a lot of good things, I’ve learned to never give up. I am awful at sparring, and I mean awful. Like run into the corner and hide awful, but all the instructors are always there giving me tips and trying to help me fight back. And now I can put this into everything. In a maths exam getting questions that I look at and say ‘Sorry but could you translate this into English please?’. But now I know that if I don’t give it a go I’m not going to go anywhere.

b. Wellbeing (Your mood, positivity)
After being at TMA I am less angry or annoyed because the physical exercise puts me in a better mood. And everybody there is so encouraging, even when you mess up rather than telling us how bad we did, they tell us how to improve.

d. School Life
This is slightly more difficult to answer as I don’t really remember school without TMA, but between Year 3 and now Year 9, I concentrate a lot more in classes and I don’t really get stressed out over exams (That’ll probably change come GCSE’s, but for now it’s great!). When I am stressed I just remind myself that I can cool off in training and punch the stress out. I think that this has really helped me because I can focus on preparing for the exam more than focusing on whether or not I will fail.

e. Home life
I get on with my brother a lot better now. When we were younger, we got into a lot of fights and we argued a lot. But through TMA I have learned restraint and respect so I’m not so much of an annoying little sister anymore. And even when we do get into arguments, we are both better at just walking away rather than fighting.