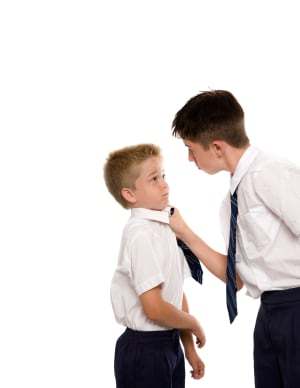 The following is based on a series of presentations I have made during Anti Bullying talks mainly in schools, some of whom acknowledge they have a bullying problem, other schools that don’t and would rather I address it via other talks such as Personal Safety or Conflict Avoidance and the schools who don’t want to admit it exists (in their school) at all.  Trust me, in 15 years of being an anti-bullying campaigner I have met my fair share of positively focused individuals actively seeking to make a lasting change in their communities and those who for whatever reason (valid or not) don’t want to actively take this issue head on.  But as a child who was bullied, I wish schools could be more proactive.

In order for something to truly be considered bullying, it must be intentional AND repetitive. Without these two words, anything could be labelled as bullying.

Bullying is when someone tries to deliberately hurt other people with words or actions. It is a behaviour, not a person. Bullying is mostly psychological and only sometimes physical.

People who bully try to take other people’s power from them. Then they use this imbalance of power to try to harm others by:

Why do people Bully?

There are a lot of reasons why people feel the need to bully others. The primary reasons are:

Can you think of other reasons why people bully? (Get feedback)

It is important to remember that people who bully others aren’t necessarily bad people. They are probably hurting inside. They probably aren’t as happy or confident as they appear to be on the outside, otherwise they wouldn’t find it necessary to bully others. Instead of hating them, or trying to get back at them, try to have compassion for them.

This is really hard, but it is an important step in helping to solve the problem.

Why is it bad to Bully others?

Seems like a daft question but a few kids have asked.  Bullying has a negative impact on everyone: the bully, the target, and the bystander. All successful human interaction requires trust and respect. Bullying destroys both.

How do you think someone who bullies really feels about themselves?

Bullying might give you a temporary feeling of power or control, but it doesn’t make you happy. It can make it more difficult for you to feel good about yourself. It can interfere with making real friends. When bullying becomes a habit, the results are usually a miserable, lonely life. A bully rarely has true friends. People who bully others into adulthood often have a hard time keeping a job. They usually have a troubled family life. How do you want to be remembered: as a bully or as a friend? Your actions now will determine how others feel about you later.

How would you feel about yourself if you watched someone being bullied and then didn’t do anything to help them?

When you witness bullying and don’t do anything about it you are failing to help another in need. Also, when you witness bullying behaviour and don’t do anything about it, you will probably feel guilty. You also miss a chance to strengthen a friendship or make a new friend. And you lessen the chance to have others come to your aid if and when you need it.

What you can do when you see others being bullied?

Do you think it is easy to take a stand against bullying? Absolutely not! It takes a lot of courage. That’s why not too many people do it. You see, most kids don’t like to see others being bullied, but they are afraid to do anything for fear that they might be bullied or that they might be viewed as a tattle-tell. But remember, there is always something that you can do when you see others being bullied. And if more people would take a stand against bullying, we would see a lot less of it. That’s why we should try to be an Upstander instead of a Bystander. An Upstander takes action against bullying. A Bystander does nothing.

Let’s look at some ways that we can be an Upstander.

Sometimes we can see things before they happen. For example, you might notice someone who has been bullied being approached by the bully. When this happens, you can use the “get there first” strategy.

Let’s pretend that Barry is approaching Johnny with the intention of bullying him, but he is still a long way off. You could walk over to Johnny and say, “Hey Johnny, why don’t you come back to the class with me early. I could really use your help with a math problem.”

Or, “Hi Johnny, How are you doing? Why don’t you join us? We are playing Football and could do with another player

2. Step In and Take Charge.

If you see someone being bullied, one thing you can do the “Step In and Take Charge” method. Imagine that you see Barry calling Johnny names in front of a crowd at lunch. You could walk right up to Barry and say, “Barry, you are bullying Johnny by calling him names. Please stop it right now. It’s not very nice and nobody likes it.”

If you see someone being bullied and you are not comfortable confronting the bully, you can use the “Distract and Redirect” method. Once again, imagine that you see Barry calling Johnny names in front of a crowd at lunch. You could walk up to Barry, pretending like you don’t notice what is going on and say, “hi Barry, that is a cool shirt.” Then grab Johnny by the arm, start to walk off and say “hey Johnny, come with me. I have something that I want to show you.”

If you see someone being bullied and you are not comfortable confronting OR interrupting the bully, you can use the “Leave and Report” method. Once again, imagine that you see Barry calling Johnny names in front of a crowd at lunch. You can leave the scene immediately and report it to someone who has the authority to do something about it. “Mrs. Jones, Barry is bullying Johnny in the hall way. Would you please stop him?”

It is important to understand that you are NOT telling if you ask for help.

Telling is when your motive is to get someone else in trouble. Reporting is when you let someone who can help you know that you (or another person) are being treated in a disrespectful manner.

Ask an adult for help. Tell them what is happening. No one should have to put up with bullying. Reaching out for help will take the bully’s power away.Connect with us at www.facebook.com/tringmartialartsacademy